The fruit harvesting season is generally divided into Early, Mid or late Season.

Fruit dropping is a good indication that fruit is ripe but it is best not to wait for all your fruit to fall off the tree before collecting them. Windfalls will most likely be bruised and won’t store well.

Your fruit tree should be picked at intervals. Cup your hand under the fruit and if it is ready it should separate from the tree with a gentle, half twist of the wrist. If it doesn’t come away easily you can leave it on the tree for another week.

As a general rule, early fruit can be eaten straight from the tree and once picked does not store very well. Some are delicious, with unusual, fresh flavours which do not appear in later fruit.

Mid-season apples, picked in September and early October, might keep for one or two months, depending upon the variety.

Late apples often need to be kept for the full flavour to intensify and are often much more complex than early fruit. They will often last over the whole winter, and sometimes as late as April or May. Picking late-keeping apples when they are slightly under ripe can also extend the storage period. 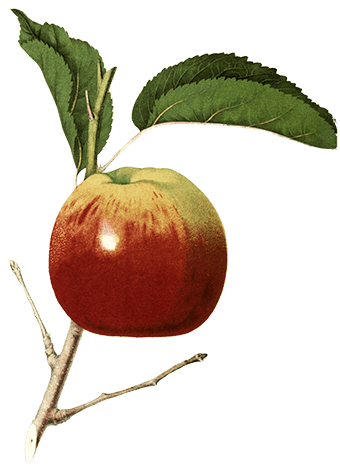 The amateur fruit grower is unlikely to have access to modern state of the art storage facilities and will most likely be storing their fruit in the shed or garage.

It is important that the storing environment is dark and cold but resistant to frost. I store my apples in light wooden crates that greengrocers are happy to give away. These are slatted and allow good air movement. Cardboard boxes with ventilation would do the job also.

Place fruit in carefully and only use the very best, unblemished fruit. Keep different varieties separate and mid-season varieties away from late season varieties. Check your boxes regularly for signs of rot. Apples can also be wrapped in newspaper to prolong storage but this makes inspection more difficult.

This site uses cookies. By continuing to browse the site, you are agreeing to our use of cookies.

We may request cookies to be set on your device. We use cookies to let us know when you visit our websites, how you interact with us, to enrich your user experience, and to customize your relationship with our website.

Click on the different category headings to find out more. You can also change some of your preferences. Note that blocking some types of cookies may impact your experience on our websites and the services we are able to offer.

These cookies are strictly necessary to provide you with services available through our website and to use some of its features.

Because these cookies are strictly necessary to deliver the website, refuseing them will have impact how our site functions. You always can block or delete cookies by changing your browser settings and force blocking all cookies on this website. But this will always prompt you to accept/refuse cookies when revisiting our site.

We fully respect if you want to refuse cookies but to avoid asking you again and again kindly allow us to store a cookie for that. You are free to opt out any time or opt in for other cookies to get a better experience. If you refuse cookies we will remove all set cookies in our domain.

We provide you with a list of stored cookies on your computer in our domain so you can check what we stored. Due to security reasons we are not able to show or modify cookies from other domains. You can check these in your browser security settings.

We also use different external services like Google Webfonts, Google Maps, and external Video providers. Since these providers may collect personal data like your IP address we allow you to block them here. Please be aware that this might heavily reduce the functionality and appearance of our site. Changes will take effect once you reload the page.