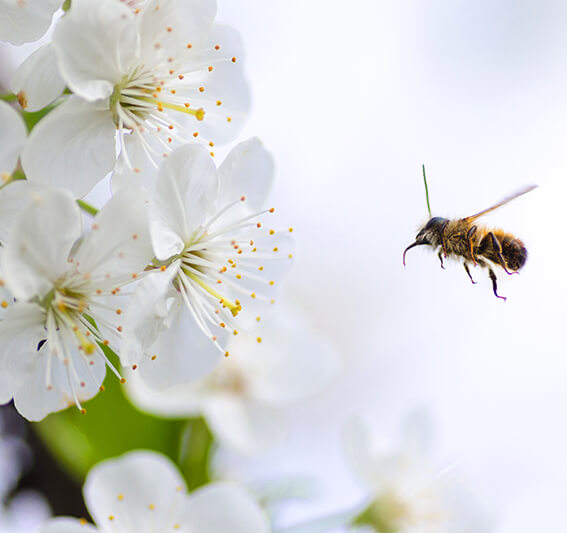 As flowering time is critical for pollination, fruit trees are classified into various flowering groups, so that it is easy to choose cultivars that will flower at the same time and effect pollination.

When choosing varieties it can be assumed that varieties from the same or adjacent groups will pollinise each other. For example, the variety ‘Discovery’ is in Flowering Group 3 so can be pollinated by any varieties from Groups 2, 3 and 4. There are six flowering groups in total.

Our catalogue lists the flowering group of each variety.

We grow more than 60 varieties of apple which are reputed to be self-fertile, or partially self-fertile. These will produce some fruit without a pollinisation partner though it is likely that even your self-fertile tree will perform better if there is a partner present.

The vast majority of varieties are self-sterile and must have a compatible variety nearby to fruit successfully. The donkey work is carried out by bees and insects that collect pollen from the flowers of one variety and deposit it on the flowers of another variety. This is called cross-pollination. The variety that provides the pollen is known as the polliniser while the agent that carries the pollen such as a bee or insect is known as the pollinator.

When choosing varieties it can be assumed that varieties from the same or adjacent groups will pollinise each other. For example, the Apple variety ‘Discovery’ is in Flowering Group 3 so can be pollinated by any varieties from Groups 2, 3 and 4.

To complicate things further, a few apple and pear cultivars are Triploids. These produce mainly sterile pollen and won’t be any use for cross-pollination, and for their own fruit to set, still need other trees. Bramley’s Seedling is a very famous example of a triploid. Therefore if you grow a triploid cultivar you may also need to grow two other pollinisers as well as the triploid, and these three cultivars must all flower at the same time.  On the plus side, bees and insects can travel long distances and there is always the chance that your fruit tree will be pollinated by a neighbour’s tree or by wild fruit such as crab apple.

Our catalogue indicates the small number of varieties that are classified as Triploid.

This site uses cookies. By continuing to browse the site, you are agreeing to our use of cookies.

We may request cookies to be set on your device. We use cookies to let us know when you visit our websites, how you interact with us, to enrich your user experience, and to customize your relationship with our website.

Click on the different category headings to find out more. You can also change some of your preferences. Note that blocking some types of cookies may impact your experience on our websites and the services we are able to offer.

These cookies are strictly necessary to provide you with services available through our website and to use some of its features.

Because these cookies are strictly necessary to deliver the website, refuseing them will have impact how our site functions. You always can block or delete cookies by changing your browser settings and force blocking all cookies on this website. But this will always prompt you to accept/refuse cookies when revisiting our site.

We fully respect if you want to refuse cookies but to avoid asking you again and again kindly allow us to store a cookie for that. You are free to opt out any time or opt in for other cookies to get a better experience. If you refuse cookies we will remove all set cookies in our domain.

We provide you with a list of stored cookies on your computer in our domain so you can check what we stored. Due to security reasons we are not able to show or modify cookies from other domains. You can check these in your browser security settings.

We also use different external services like Google Webfonts, Google Maps, and external Video providers. Since these providers may collect personal data like your IP address we allow you to block them here. Please be aware that this might heavily reduce the functionality and appearance of our site. Changes will take effect once you reload the page.